Samosa is a stuffed pastry, and a common snack in South Asia, Central Asia, the Horn of Africa, and the Arabian Peninsula. It generally consists of a fried triangular, shaped pastry shell with a savory filling of spiced potatoes, onion, peas, coriander, and sometimes meat. In a variety called chamuça they are also very popular in Portugal.

The popular vegetarian version contains flour, potato, onion, spices and green chili. It is often eaten with chutney, such as mint, coriander or tamarind. It can also be prepared as a sweet form, rather than as a savory one. Non-vegetarian versions can contain meat – usually lamb or chicken. 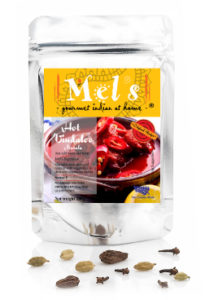 In a large pan throw in the mince and 1 packet of Mel’s Hot Vindaloo Masala and fry well. Add half a cup of water and fry. Add the shredded potato and peas and cook. Keep it on a low heat and cook till the meat is done.
Cut the pastry into squares and fill with the mince. Fold the pastry over and seal the sides up with a dab of water to form triangles. Deep fry till golden brown. Serve with Mel’s Tangy Tamarind Chutney or Coriander and Mint Chutney. You can also use with vegetables for a meat free version.